Ex-Premier League defender Ritchie De Laet was part of the back four that kept a clean sheet as Royal Antwerp cemented their place in the top two with an emphatic win over KV Oostende. Royal Antwerp started the weekend in second place and they were able to consolidate their position thanks to the 3-0 win over away team Oostende. 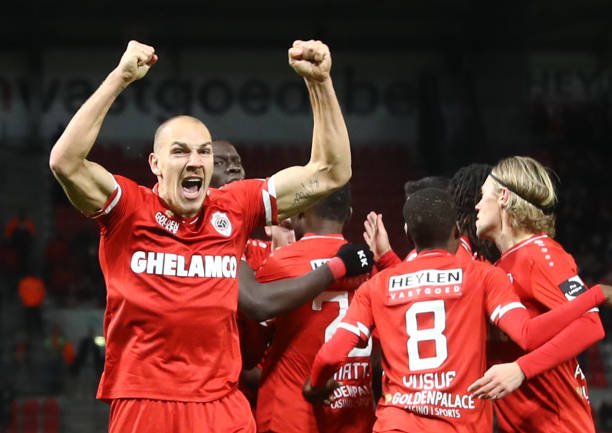 Oostende were able to hold their hosts for the entirety of the first half before they capitulated in the second half. Royal Antwerp scored three second half goals on the way to a 3-0 victory over Oostende in their latest league outing as far as the Belgian Pro League is concerned. The big win from the league encounter on Sunday was enough to keep Royal Antwerp in the top two spots on the league standings.

Danish attacking midfielder Viktor Fischer set Royal Antwerp on the way to a big win with the first goal of the match three minutes into the second half. Swiss striker Michael Frey then added a second goal for the hosts on 62 minutes before Manuel Benson wrapped up the points for his team with ten minutes left on the clock.

Goals from Fischer, Frey and Benson in the second 45 minutes ensured that Antwerp returned to winning ways after the disappointment of their last league game before the Oostende clash. They were able to bounce back at the first time of asking after losing 2-1 at the home of Sint-Truidense V.V (STVV).

With the help of the defence which had Ritchie De Laet on the right side, Royal Antwerp were able to secure a dominant win ay the expense of Oostende to make it three victories from the last four league outings. Apart from Ritchie De Laet, Antwerp also hadDinis Almeida, Sam Vines and AbdoulayeSeck in their defence.