Aston Villa target Jarrod Bowen is understood to have been offered a new deal by current club Hull City. According to reports from the local media, Hull City have offered the player a new deal as they attempt to fend off transfer attempts in January. 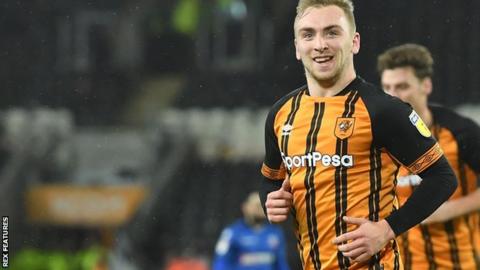 Bowen is an exciting prospect for the club and was a target for the Hammers in January as well as last summer. Reports claim that Hull City vice-chairman Ehab Allam has begun talks with the player and has offered him a new three-year contract to remain at the club.
Aston Villa was one of the busiest teams in the summer making close to 12 signings which appear to have worked out well for the club. Manager Dean Smith has been ambitious with his tactics this season using his exciting attack to good effect.

Despite this, it is expected that there could be more reinforcements as the club aims to keep its current status in the EPL.

Meanwhile, Manchester United have been linked with a transfer move for Juventus midfielder Emre Can. Can is currently out of favor with the Turin club and there have been reports that the player is looking for a January exit.

The German was excluded from the Champions League squad by manager Maurizio Sarri which fetched a lengthy reply from the player on social media. Manchester United are thought to be the frontrunners for his signature as they look to reinforce in January.

The likes of Fred and Matic have disappointed this season and there is a growing discontent regarding the quality of the midfield. Can is regarded as a modern midfielder capable of playing different positions.

He also understands the difficulties of the EPL having played for Liverpool a few seasons back. It remains to be seen whether a transfer will occur in January.